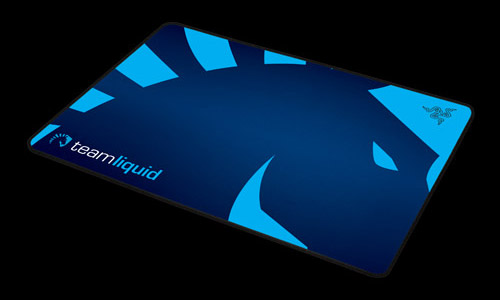 Razer, one of the world’s pioneering supporters of e-Sports, with Team Liquid, elite pro-gaming team, are proud to announce the launch of the Razer Goliathus e-Sports edition mouse mat.  Emblazoned with the iconic logos and colors of the world’s top e-Sports teams, the Razer Goliathus e-Sports edition mouse mat is wielded by pro-gamers for both its performance-enhancing surface and as a rallying team banner.

“Razer is dedicated to supporting e-Sports,” said Robert ‘RazerGuy’ Krakoff, President, Razer USA.  “So we designed with some of the best teams in the world to get their logos on the Razer Goliathus mats – personalized editions they can use with pride during tournaments.”

“The first time I used the Razer Goliathus Team Liquid edition was when I won Dreamhack,” said Song ‘Hero’ Hyeon Deok, Protoss champion on the Team Liquid roster.  “I have been using it for awhile now and I really like how it feels.  I’m proud and happy we get to share it with our fans.” Gamers can expect more team branded Razer products to come.