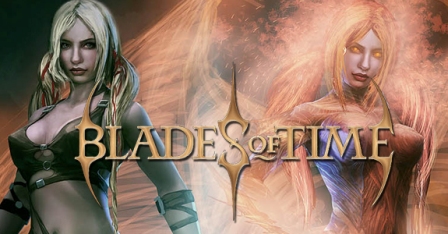 Today, Konami Digital Entertainment, Inc. announced Blades of Time is now available in retail stores nationwide. Blades of Time is a new action title for coming to Xbox 360? video game and entertainment system from Microsoft and PlayStation?3 computer entertainment system. Developed by Gaijin Entertainment, Blades of Time takes the ?hack and slash? genre and flips it on its side by bringing in a revolutionary game mechanic called ?Time Rewind,? which allows players to clone themselves and travel back in time to attack enemies and solve puzzles. Add to this a beautiful heroine, and you?ve got one of the most fun and high-energy games to come along in some time.

In Blades of Time, players don the persona of the gorgeous treasure hunter, Ayumi. Deadly with both guns and swords, Ayumi finds herself in a remote land of lush trees and majestic landscapes. On the hunt for treasure, she quickly learns that she?s not alone on this island. Armed with her dual katanas and arsenal of rifles, she?ll do battle with gargoyles, monsters and various sinister forces to uncover the secrets of this dangerous place. As carves a path of destruction through Dragonland, she accumulates more powers and better weaponry that make for a thrilling and rewarding game experience.

Blades of Timeis rated M or Mature by the ESRB and is available on XBOX 360 and PlayStation 3 for the SRP of $39.99. For more information, including screenshots and the latest trailer, please visit: www.konami.com/download/ or www.konami.com/games/bladesoftime/.