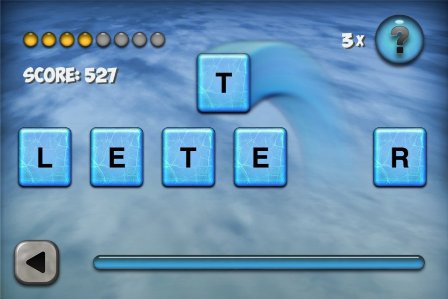 Well-known app developer, Bohemia Touch today is excited to announce the release of their latest app “Letter Mix” for iOS. This fun and addicting word game is sure to have you playing for hours on end. The object of the game is simple – reorganize and unscramble the letters on the screen to form an actual word. Unlike many other word games, Letter Mix comes complete with a sleek interface and design which looks beautiful on the retina display!

Letter Mix is intended to stimulate the mind as users try to guess and decode the letters that appear on the screen. When the letters are rearranged to form a correct word, they are pushed to the left of the screen and points are awarded to the user. Try to get as many points as you can to achieve high scores and rankings! Seems easy right? Don’t be fooled! The game’s difficulty intensifies as you play, allowing for up to 5 rounds of increasing complexity! The game also offers a limited number of “Hints” and “Extra Time” which users can utilize if they are in a bind. Choosing the “Hint” option will provide the users with the first few letters of the word. This is extremely helpful on words with lots of letters! The “Extra Time” button awards users a few additional seconds to solve the puzzle. With challenging levels and seemingly unsolvable words, Letter Mix is guaranteed to provide you with hours of fun-filled game play!

The app even automatically saves users’ high scores for others to see. Try to outplay your friends by getting a higher score! From the home menu, users can see the rankings of other players to see where they rank overall. Letter Mix is also seamlessly integrated with Game Center allowing for all of your achievements to be logged! The app’s main menu also presents users with other options such as volume control and the ability to make in-app purchases. That’s Right! Gamers can purchase additional “Hints” or “Extra Time” as needed directly from within the app! Try to get three stars on each level. The less hints you use, the higher score you receive!

What word game would be complete without the ability to share with friends? Letter Mix is fully integrated with Facebook, Twitter and Google , allowing for users to invite their friends to download the game and start playing! Roman Knize of Bohemia Touch stated that “Letter Mix is definitely going to be amongst the most enjoyable word games delighting word game lovers!” Be sure to take part in this exciting game by downloading it today.