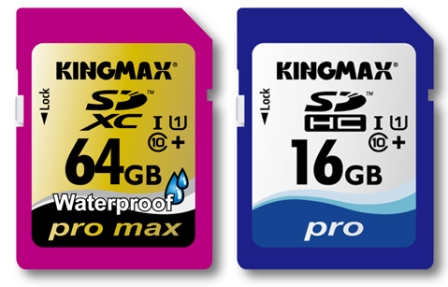 The increasing popularity of digital cameras meant more emphasis is placed on high-resolution pictures, non-stopping continuous shooting and easy photo / videos browsing; therefore, the demand for memory card no longer confines to only high capacity, it has also extended to superior storage performance. KINGMAX, a keen observer of market trends, has once again surpassed competitors by releasing its industry-leading SDHC Pro/ SDXC Pro max memory cards. With maximum twice or triple as fast write speed than the previous Class10 memory cards, the new SDHC Pro is equipped with a write speed up to 20MB/s and the SDXC Pro max exhibits write speed up to 30MB/s. Such improve in performance fulfills DSLRs’ need for high-speed storage, and significantly reduces the waiting time of file transfer between memory cards and computers.

Other than the improved transferring speed, SDXC Pro max also comes with the mega capacity of 64GB. The adaptation to the latest exFAT format allows these memory cards to break from the limitation of 4GB in one single file; enabling  the storage of 14,560 1000 megapixel pictures and a playtime of MP3 files over 1,075 hours as well as HD video recording up to 512 minutes. Insufficient storage space created by massive files or failure to capture a beautiful moment due to lack of storage will no longer be of any concern.

What is worth noting is that KINGMAX also introduced the water-proof counterparts to the SDXC Pro and Pro max ultra speed memory cards. Utilizing KINGMAX’s exclusive water and dust proof PIPTM packaging technology, the water-proof product line offers a full range of capacities from 8GB to 64GB. The SDHC Pro and Pro max are fully compatible with Windows 7, XP, or Vista, and also support CPRM（Content Protection for Recordable Media）, last but not least, they are packed with ECC and wear leveling functions.

SDHC Pro and SDXC Pro max comply with multinational standards such as RoHS, CE, FCC and compatibility with major OS is guaranteed. KINGMAX is proud to announce all of its products are subjected to the most stringent quality control; rigorous testing is conducted to ensure the highest quality. All KINGMAX products come with warranty to provide 100% satisfaction guarantee to customers.