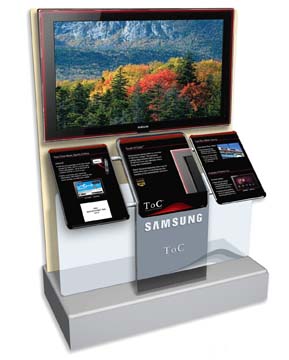 Samsung Display Co., Ltd, a global leader in display panel technologies and products, announced today that it has been officially launched as a new corporation, spun off from Samsung Electronics. Samsung Display held its inauguration ceremony today and will begin business operations in earnest after carrying out incorporation registration on April 3.

Park said at the inauguration ceremony, “We will make Samsung Display a well-respected company through continuous efforts to supply a wide variety of customized products that provide great value to our customers.” He added, “By continually staying one step ahead of our competitors, we can make our company the very best in the display market.”

More than 350 employees attended the inauguration ceremony. At the inauguration, many reflected on the success of Samsung Electronics’ LCD Business over the past 21 years and expressed a widespread determination to once again become ‘The No. 1 Global Display Manufacturer’.

Samsung Display began as an R&D arm of Samsung Electronics in 1991 and has developed and released some of the world’s most creative and innovative displays for two decades. Now, as a separate corporation, it will respond to rapidly changing market conditions more efficiently, while providing timely, well-differentiated products and services this year and well into the future.