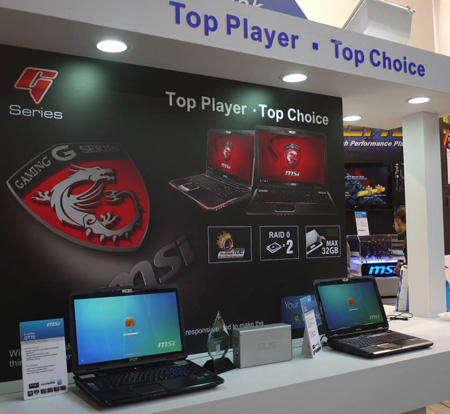 MSI exhibited its GE60, and GE70 next generation gaming NBs in its CeBIT 2012 booth (Hall 14, H30) this month in Hanover, Germany. Streamlined and built for speed, the exteriors of MSI’s new generation GE60 and GE70 gaming laptops resemble leopard eyes.

The metal chassis is sheathed in the latest laser-etched Color Film Print which is not only translucent; it protects against scratching and wear, while adding a touch of class. Reminiscent of leopard eyes, the lines further set off the metallic luster. The MSI GE60 and GE70 pack Intel’s latest quad core processor, nVidia’s top-of-the-line discrete graphics card with 2GB GDDR5 of display memory. These machines give serious gamers around the world powerful processors and displays and an awesome light and sound show to give you the edge when you take on the bad guys.

Responding to the call of extreme gamers, MSI worked side by side with leader in gaming peripheral design SteelSeries to provide the GE60 and GE70 a keyboard designed specifically with gaming in mind.

The GE60 and GE70 gaming laptops employ MSI Audio Boost solution technology. The audio output employs a gold flash audio jack, which although expensive, is the best conductor there is. It also prevents oxidation, enhances transmission efficiency, and reduces noise, endowing the GE60 and GE70 with crisp, clear, high fidelity stereo sound. In addition, the built-in earphone AMP even gives headsets superior acoustics, so you experience stereo sound to give you a sense of space and directions when playing and no lag when listening to game sounds or when talking with teammates. It doesn’t get any better than this.

MSI’s GE60 and GE70 laptops are equipped with a full HD 16:9 wide screen that offers bright colors without those pesky black strips at the top and bottom of the screen when you watch films. The HD720p webcam allows you to enjoy smooth, bright high fidelity web calls with friends and family. If you want something bigger than a high definition computer screen for viewing films, the MSI GE60 and GE70 gaming laptops also come with an HDMI port, so any type of high-fidelity, high-definition video can be played on your NB, but viewed via a cable on a large-screen LCD television.