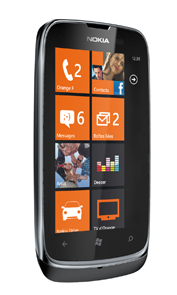 Nokia today announced an NFC version of the recently-launched Nokia Lumia 610, the most affordable smartphone in the Lumia range and the perfect introduction to Windows Phone for a younger audience. Orange will be the first operator to range the Lumia 610 NFC, which can pair with NFC accessories and read NFC tags. The Lumia 610 NFC also has the hardware and software enablers for the implementation of NFC payment and ticketing solutions, and has been certified for contactless payments both with MasterCard PayPass technology, and with Visa’s mobile application for payments at the point of sale, Visa payWave.

“Nokia continues to lead the field in NFC with this latest implementation on the Windows Phone platform, in which we have the full support of Orange,” said Ilari Nurmi, head of product marketing for Nokia’s Smart Devices business unit. “We’re bringing NFC right across our portfolio, and together with our ever-growing range of NFC accessories we’re making it easy for people to connect via a single tap. We’re also enabling operators and other service providers to build NFC payment and ticketing solutions on top of our smartphones.”

“Orange is committed to rolling out mobile NFC services in all its European territories and as part of this goal we’re very excited to be the first operator to launch the Lumia 610 NFC,” said Yves Maitre, Senior VP Mobile Multimedia & Devices at Orange. “The Nokia Lumia smartphones have been very well received by Orange customers. We are now going one step further and adding an NFC-enabled handset to this popular range of devices, enabling people to use contactless services via a single tap. Nokia is a natural fit for us regarding NFC and, like Orange, has shown a very early commitment to the standard.”

MasterCard PayPass technology provides consumers with a fast and convenient alternative to cash at the point of sale for their everyday purchases. Devices certified by MasterCard, such as the Lumia 610 NFC, go through a rigorous testing process by a MasterCard accredited laboratory to ensure they will work seamlessly with the PayPass network. “We are excited to have certified the Lumia 610 NFC for use with our industry-leading PayPass technology, joining other Nokia smartphones helping consumers choose when, where and how they shop on devices they own and love,” said Mung Ki Woo, group executive, Mobile at MasterCard.

The Lumia 610 NFC is expected to be available early in the third quarter of 2012. For more information about the Lumia 610 NFC: http://europe.nokia.com/nokia-lumia-610-nfc