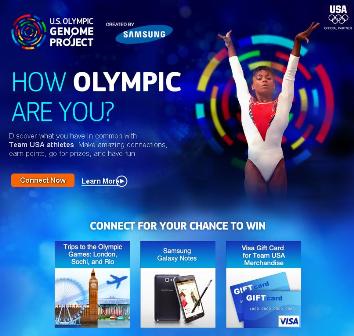 Samsung Electronics America Inc., with the help of the U.S. Olympic Committee (USOC) launched today the U.S. Olympic Genome Project, a groundbreaking endeavor for the London 2012 Olympic and Paralympic Games. This first-of-its-kind social media platform lets Americans discover how they’re connected to Team USA and the Olympic Movement through an online community of like-minded individuals that delivers an immersive experience ahead of the Olympic and Paralympic Games. Samsung is the Official Wireless Telecommunications Equipment Partner of the USOC.

“The Olympic Games is one of the few global celebrations of human potential and achievement and Samsung wants to give consumers the opportunity to be a part of this in a personal way,” said Ralph Santana, Senior Vice President and Chief Marketing Officer for Samsung Electronics North America. “We believe everyone has a connection to Team USA. The U.S. Olympic Genome Project will help consumers discover how they’re connected to these athletes. As we approach London 2012, we hope to fuel a sense of connection and passion for the Olympic Games among consumers, especially as they get to know the Olympians and Paralympians through this innovative social media platform.”

Fans can discover their connections to the athletes and the Olympic Movement by going to Samsung.com/HowOlympicAreYou and use their Facebook profile to connect to the Genome Project. Once they “like” the Genome Project, they can then share their connections with their Facebook friends, take quizzes to raise their member status, learn about athletes, and follow Team USA news.

“Through the U.S. Olympic Genome Project, Samsung has created a way for Americans to get involved in the Olympic community while drawing connections between all of us who enjoy the magic of the Games,” said Lisa Baird, USOC Chief Marketing Officer. “As a fan, it’s incredibly exciting to find out the links you have to these amazing athletes. You may discover that you attended the same school as one of our gymnasts, or you have a close friend in common with one of our wrestlers. It makes it that much more fun and personal to cheer on your favorite athletes.”

Fans gain status as members of the Genome community by answering questions to create a more robust profile which increases the chances of creating connections to more athletes. They can also enhance their status by taking quizzes that test their Olympic knowledge or through the achievement of the athletes they’re connected to. As fans rise in status, they earn tokens that can be redeemed for great prizes such as Samsung mobile products and chances to win trips to London.

Team USA athletes will be able to use this platform to share information about themselves, raise awareness of their sport, keep fans up to date on their training and raise funds to support their Olympic and Paralympic Games efforts.

To join the U.S. Olympic Genome Project, visit www.Samsung.com/HowOlympicAreYou  and “like” it.