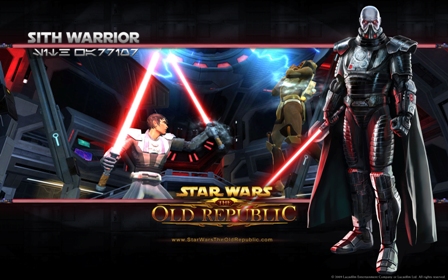 Create a family legacy that can rival the Skywalkers! BioWare, a Label of Electronic Arts (NASDAQ: EA) and LucasArts today released Game Update 1.2: Legacy, the highly anticipated content update for Star Wars: The Old Republic. This massive update delivers an incredible amount of new high level gameplay content for players and also includes the evolution of the Legacy System, a feature that ties all of your characters together into one family, regardless of class or faction, and allows them to unlock custom new abilities. Game Update 1.2 will also include some of the communities’ most sought-after game enhancements including user interface customization and guild banks along with gameplay and balancing fixes.

To celebrate the release of Game Update 1.2 and thank fans for their support, BioWare also announced that it would offer Star Wars: The Old Republic players a number of in-game rewards:

“Game Update 1.2: Legacy is a huge milestone for The Old Republic and clearly demonstrates what we mean when we talk about this game being a full-fledged, ongoing service,” said Dr. Greg Zeschuk, General Manager of the BioWare Label’s MMO Business Unit and Co-Founder of BioWare. “Not only is Game Update 1.2 the largest update for The Old Republic, but it also addresses a lot of the game features and enhancements our players have been asking for since we launched a little over three months ago, We are incredibly proud of the team for being able to deliver an update of this size and quality, in a relatively short amount of time.”

Game Update 1.2 is highlighted by the next evolution of the Legacy System, giving players the ability to give all of their characters a strong familial bond in the form of bonus abilities and character customization. Players will link their different characters together into a single family tree, giving them the power to unlock and share special Legacy-only abilities, and new convenience items for player ships including the Galactic Trade Network terminal. The Legacy System will also give players the ability to unlock new races for new characters and will be advantageous in strengthening companion characters affection and moral alignment through bonuses.

In addition to the Legacy System, the Game Update 1.2 will introduces other game features, including improved UI customization, Guild Banks and valuable new in-game items. This game update will also introduce challenging new high-level content for both experienced and new players to enjoy:

The Old Republic is set thousands of years before the classic Star Wars movies, with the Galactic Republic and Sith Empire locked in the middle of an epic, galactic war. By choosing one of eight iconic Star Wars characters, including the Jedi Knight, Jedi Consular, Smuggler, Trooper, Sith Warrior, Sith Inquisitor, Bounty Hunter and Imperial Agent, players become the hero or villain of their own personal Star Wars saga. Players team up with friends online, fighting in heroic battles reminiscent of the films, immersing themselves in a galaxy full of vibrant characters and planets, while experiencing visceral Star Wars combat.