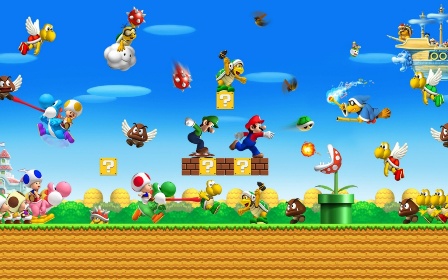 Nintendo fans will have no shortage of reasons to celebrate this year, thanks to a wealth of upcoming games and content for both the Nintendo 3DS hand-held system and the Wii console. Nintendo today revealed plans to launch New Super Mario Bros. 2, a new side-scrolling Mario adventure for Nintendo 3DS, this summer. Later in the year, Nintendo will mark the 20th anniversary of the Kirby game series with a special compilation game disc for the Wii system. Other content on the way includes a system update for Nintendo 3DS, re-runs of the popular Kid Icarus anime videos as well as the May 20 launch of Mario Tennis Open.

New Super Mario Bros. 2 is a traditional side-scrolling adventure game featuring Mario, Luigi and loads of other favorite characters from the popular Mario series. The game was created specifically as a pick-up-and-play experience that can be instantly enjoyed by players of all skill levels on the Nintendo 3DS system. The game will launch across North America in August.

To celebrate the 20th anniversary of the cute-but-powerful Kirby character, Nintendo will release a special anniversary software disc for Wii later this year. The disc will contain a variety of previously released, fan-favorite Kirby games. Additional Kirby anniversary activities will be revealed at a later date.

“A new Mario game and a big Kirby celebration will help make 2012 an especially great year for Nintendo fans,” said Scott Moffitt, Nintendo of America’s executive vice president of Sales & Marketing. “Whether they’re playing at home on Wii or using Nintendo 3DS to have fun on the go, players can look forward to experiencing some of our biggest franchises in exciting ways.”

On April 25, a system update for Nintendo 3DS will give users new functions to explore. By downloading this update, users can create folders on the system’s HOME Menu to organize their content. This new feature is designed to make it easier than ever for players to access their favorite downloadable games, videos and demos. With this update, users will also get helpful recommendations in the Nintendo eShop for titles they may like. Other elements of the system update include the ability to update select software, such as a Mario Kart 7 update coming in mid-May that will resolve shortcut exploits in the game.

For even more hand-held fun, Nintendo fans can look ahead to the May 20 launch of Mario Tennis Open for Nintendo 3DS, which invites players to step onto the court with Mario and his friends for fast-paced tennis action and a mix of remarkable new tennis challenges. Players can play as their own customized Mii characters and choose from approximately 200 special items, including rackets and tennis gear that not only enhance their character’s appearance but also modify their abilities. Players can also suit up their Mii characters with outfits that both resemble and offer the skills of popular Nintendo characters. They can also swing into action in local and wireless Internet multiplayer modes that let families and friends play together.