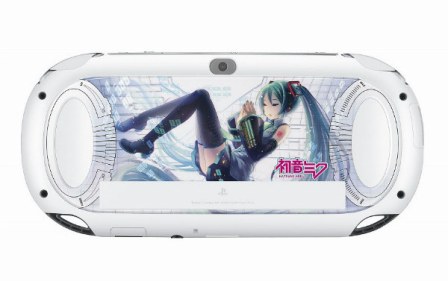 NEXT HATSUNE MIKU Project DIVA is the latest edition of HATSUNE MIKU Project DIVA, the rhythm action game franchise in which the main character is the electrical diva named “Hatsune Miku”, and which has sold more than 1 million units in Japan*2. While succeeding the franchise’s original concept of “play to sing”, this NEXT HATSUNE MIKU Project DIVA newly adopts the “scratch” feature, allowing users to rub the multi touch screen to beat out rhythms intuitively according to the Hatsune Miku’s medley songs. Furthermore, the characters (modules) are totally remodeled to match the PS Vita’s beautiful display, which enables users to fully enjoy their enhanced cuteness and expressive faces along with their brand-new costumes.

The PS Vita system included in“PS Vita Hatsune Miku Limited Edition”, comes with a special design, printing Hatsune Miku on its rear touch pad. Users can immerse into the sense of embracing her in their own palms while playing with their hands on the rear touch pad.

By introducing this special limited edition concurrently with the launch of much-awaited NEXT HATSUNE MIKU Project DIVA, SCEJ will further accelerate the expansion of PS Vita platform.