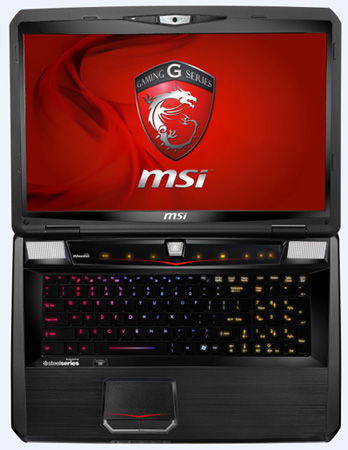 After being recognized with the Innovations Honorees award at CES 2012 for its considerable innovative R&D capabilities in the design and manufacture of its G Series gaming notebook, MSI GT70 was recently awarded by global top media Computer Shopper. They pointed out these advantages of MSI GT70 which are “Aggressive pricing, Fun and functional keyboard, touch pad, Scorching performance, Superb graphics, sound, Multiple USB 3.0 ports and Blu-ray burner.”

Computer shopper introduced that “GT70 is the first notebook we’re reviewing with one of Intel’s Third-Generation (a.k.a. “Ivy Bridge”) processors inside, as well as a GPU from Nvidia’s new GeForce 600 line (code-named “Kepler” during its development). The GT70 has a smaller sibling, the 15.6-inch GT60, which also comes with the same Intel and Nvidia chips. In addition to the new CPU and GPU, both notebooks come with Dynaudio-branded speakers and subwoofer built in, and a gorgeous multi-colored backlit keyboard—a very agreeable combination for serious gamers.”

Computer shopper praised that “they were very impressed with the GT70’s performance, especially given its price. It beat out the more expensive gaming laptop brands on several of our tests, thanks to the new Intel and Nvidia chips, and we’d be quick to recommend this notebook to anyone shopping for a laptop for serious gaming on a relative budget.”

Below the control bar is the sprawl of the keyboard, Computer shopper pointed out “it’s the GT70’s most visually pleasing element. Each black key has a multicolored LED underneath it, and the colors are customizable. (You tweak the colors via an easy-to-use software utility.) MSI breaks up the keyboard into thirds and allows you to choose a color for each section. The keyboard even has different settings for the type of glow. For example, we got a real kick of out setting the color red for every key, then setting the glow type to “breathing.” That upped this behemoth’s intimidation factor considerably.”

About the performance testing, Computer shopper pointed out that for starters, “our MSI review unit scored 13,653 on our PCMark Vantage test, which measures overall system performance…That’s more than other gaming laptop brands…”

About the battery life testing, Computer shopper on their Battery-Rundown Test, They play a DVD movie at 50 percent brightness, on repeat mode, until the battery dies. “MSI GT70 got the best battery life in gaming laptops. As The GT70’s result of 3 hours and 13 minutes (3:13) blew us away, in a relative sense. That’s way better than other gaming laptop brands”

Computer shopper praised “the performance of the MSI GT70 was very impressive—definitely for the price, but also in a larger sense. As you can see from the scores, this kind of blazing performance means you can indulge in gaming and/or multitasking to your heart’s content.”