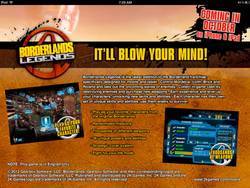 We have just learned that Gearbox plans to release a spin-off of Borderlands supports iOS this month. The first details were revealed.

A jewel signed Gearbox, Borderlands license is clearly a must for fans of the original FPS and cooperative. Borderlands 2 was released a few weeks ago on PC and consoles, enriched even more arguments of his predecessor, thereby offering an interest and a lifetime of high flight.

If we know that the development studio is now focusing on DLC for the game, a spin-off has been revealed through an advertisement published in the digital strategy guide Borderlands 2.

This title will be called Borderlands Legends and developed exclusively for iOS, announced compatibility with the iPhone and iPad. In this game, it is possible to control four characters of the first episode, namely Roland, Brick, Mordecai and Lilith. It will always matter more to exterminate enemies to loot weapons and other equipment, while gaining experience.Just as in other episodes, it will be possible to unlock unique abilities, via skill trees.

The missions of the game are randomly generated and will issue a cover system “strategic”.

Borderlands Legends will be available in October 2012, no further details at this time.