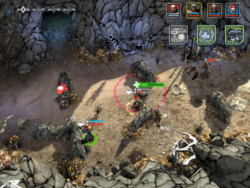 To mark the release of Borderlands Legends on iOS, the editor provides us with a video that shows gameplay of this adaptation opting to kick for handling different episodes PC and consoles.

The development studio Gearbox has not only satisfied develop Borderlands 2, but is also considered a mobile version of its license: Borderlands Legends.

This game was announced a few days ago only just released on the App Store at a price of 5.99 euros on iPad / iPad Mini and EUR 4.89 iPhone and iPod Touch.

The launch video below shows the angle aerial view specific to that version to better fit the screens of mobile devices from Apple, thus orienting the game to a slightly more strategic dimensions, since sets will often use to protect themselves.

Basically, Borderlands Legends offers the same attributes as the other episodes, including many missions – randomly generated for the occasion – on Pandora, with unique weapons to loot on enemies or in chests, unlockable abilities and we find the four heroes of the first part.