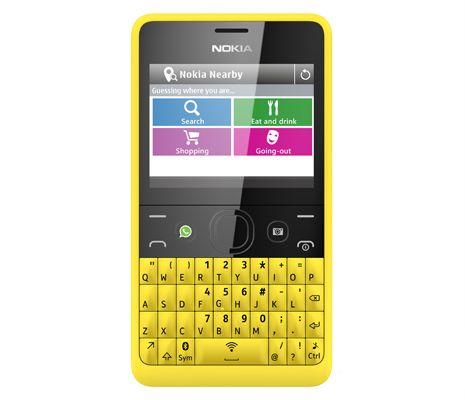 Nokia promised this Wednesday with a teaser suggesting a new mobile in its Asha range of smartphones, which got sold almost 5 million copies in the first quarter of 2013, almost as much as its Lumia series.

It is a 2G phone/EDGE to be proposed in single and dual SIM with a 2 megapixel camera on the back, directly accessible by a dedicated button on the front, and with the possibility of editing and direct sharing via Bluetooth (without pairing) via the function Nokia Slam.

The device embeds wireless connectivity WiFi and Bluetooth 2.1+ EDR wireless. One of its features is to have a dedicated key moving towards the mobile messaging service WhatsApp, while we also find preinstalled social network apps like Facebook and Twitter.

It complements the Nokia Asha 205, introduced in November 2012, which has in its front a dedicated key access to Facebook. The Nokia Asha 210 will be available in several colors and will be priced at $72 excluding taxes from the second quarter of 2013.