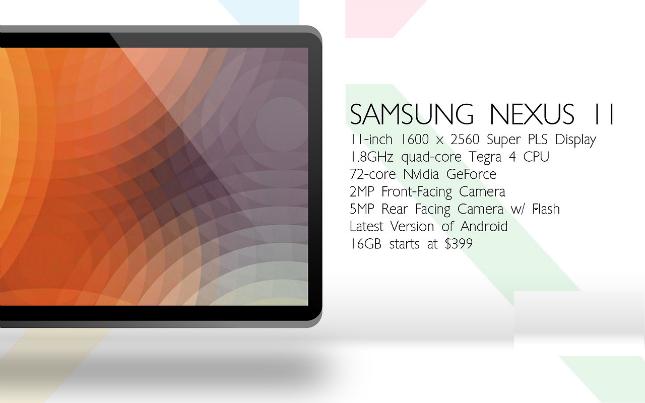 With the starting of the Google I/O conference tomorrow, which should be an opportunity for Google to officially present the future of the Nexus products range, rumors continue on Nexus 5, 8 and 11.

And rumors may continue beyond the conference, since Google has recently announced that the information presented at the conference will turn more around the software and guidance of the brand in the mobile industry and software on the devices.

However, according to various leaks, rumors and clues, a designer, Bob Freking has proposed its own vision of what could be the next upcoming devices on the side of Google.

Regarding the rest, all remains consistent, with the 16GB storage announced, allowing Google/LG to offer a tight price while leaving the possibility of an increase with the presence of a micro SD port.

The Nexus 8, as stated by Bob Freking, is an update of the Nexus 7. Equipped with an 8-inch IPS LCD screen and a resolution of 1200 x 1920 pixels, it will also have a Snapdragon 600 processor clocked at 1.7 GHz would be built there, coupled with Adreno 320 graphics chip.

Difficult to really know if this tablet will be on the menu. On the other hand, we rather expect a Nexus 7 internal revisited, not in a new format which does not seem particularly relevant.

Reworked version of the Nexus 10, posting a 11-inch screen with Super PLS definition of 1600×2560 pixels, would move to a platform of quad-core Tegra 4 CPU clocked at 1.8 GHz and a 72-core NVIDIA GeForce GPU.

So far there are rumors of a Samsung Exynos 5 Octa processor, logical since it is Samsung who is tipped for making this tablet.

If these concepts are attractive, some might be different rumors to confuse everyone. But Google could actually create a surprise by offering unexpected devices. Definitive answer will come in a few days!