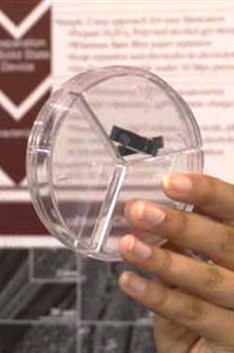 Now, there is no more hours required to recharge your smartphone. An 18-year-old Indian-American girl’s technology makes this possible in just 20-30 seconds.

Thinner, qualitative in their display, responsive and comprehensive in terms of their features, smartphones have clearly evolved in recent years. Except on one aspect may be: its recharging, and more specifically the speed of recharging.

While a smartphone usually manages to work for more than three days if it is normally used, the battery takes indeed a lot of time to recharge, often a few hours. That’s something particularly penalizing for those who has the misfortune to fall in battery bay just before leaving for the weekend or going to work.

And it may be on the side of Eesha Khare, a 18 year old teenager, the industry should look. With her invention of Super-Capacitor that finished on top of the podium last week at the Intel Foundation Young Scientist of Phoenix event in Arizona, it is indeed possible to charge a smartphone in just 20-30 seconds.

Another advantage: the technology allows 10,000 reloads without any physical damage to the battery, while the limit is around 1000 today.

Icing on the cake, as a technological breakthrough, it would also charge digital cameras, tablet PCs and laptops. Even the batteries in our cars could benefit from it.

Suffice to say that we hope that the industry will focus on this very promising technology.