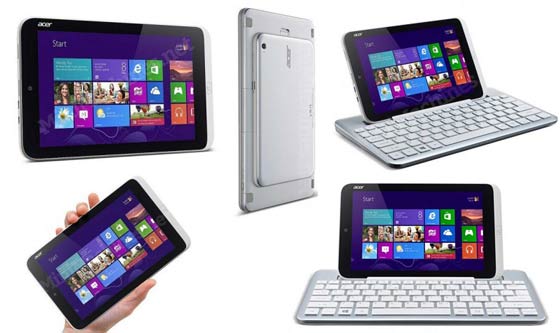 Acer unveiled Iconia W3, on Monday at the Taipei, an 8-inch model tablet powered by an Intel processor and the full version of Windows 8. The manufacturer is pleased to launch the first Windows 8 tablet that can be held in one hand.

Acer took a press conference on Monday, the eve of the opening of Computex, to unveil its first Windows 8 tablet with a screen of 8.1 inches (20.57 cm) in the market. Iconia W3 promises to reach the last operating system from Microsoft, including Windows and Office Store, through a hand-held device.

To do this, the Iconia W3 adopts Intel, in the form of an Atom Z2760, with an integrated graphics controller (GMA 3650) and is accompanied by 2GB of RAM. The 8-inch display for its 1280 x 800 pixels using a TN panel (not IPS), officially uses the minimum resolution that is required to run the environment (Modern UI) specific to Windows 8.

The tablet comes accompanied by a keyboard-shaped dock, with very fine and white keys. The keyboard logically exceed the dimensions of the tablet itself, but Acer has found an ingenious mechanism for this that does not prove too troublesome during transport: the tablet can be stored on the back of the keyboard, which then protects the screen.

The Iconia W3 also adopts two Photo sensors (2-megapixel on the back and front). It will be split into 32 and 64 GB of storage, expandable by microSD card. The dimensions stand at 135 x 219 mm, a thickness of 11.35 mm and an estimated 500 grams. Connectivity, you can enjoy the WiFi 802.11n, and micro-USB and micro-HDMI ports.

JT Wang, Acer’s CEO, confirmed that a full version of Office 2013 Home Edition is provided via an activation key. The Microsoft Office Suite was previously available free on Windows RT tablets, but not on devices equipped with Windows 8.

The launch should take place in the coming weeks, with a starting price set at 329 euros (379 euros for the 64 GB version).