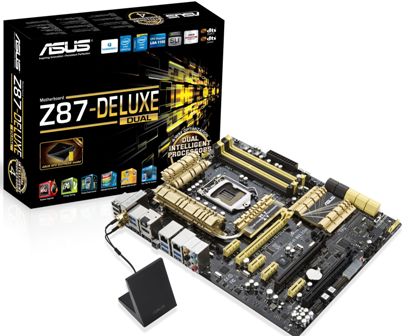 ASUS is also proud to share that the Z87-DELUXE/DUAL is the first Intel 8 series-based motherboard certified for Intel Thunderbolt, shipping with two ports of the advanced connectivity standard. The previously unannounced Z87-EXPERT was unveiled today, joining the ASUS Z87 motherboard range and also featuring Thunderbolt technology.

Based on near field communication technology, the external NFC EXPRESS accessory enables instant pairing with Android smart devices and the included NFC tag through simply touching them to the sensor box.Content such as photos and videos can be transferred from smart devices to desktop PCs with a tap. NFC EXPRESS automatically backs up content added to Android devices since last syncing them with a desktop PC. The Remote Desktop function allows for viewing and controlling PCs via Android smartphones and tablets, while Quick Launch saves shortcuts to favorite apps, which can then be started with the ease of a single tap. NFC EXRPESS also allows for password-free Windows 8 login, so users can go directly and quickly into the operating system.

With NFC EXPRESS, simplified Windows 8 access and interaction become available to a wider user audience, whether for personal or professional use. As an added bonus the device includes two USB 3.0 ports that transfer data at up to ten times the speed of USB 2.0. The Z87-DELUXE/DUAL motherboard ships bundled with NFC EXPRESS, which is also available to purchase as a separate accessory.

Some additional details about the products: