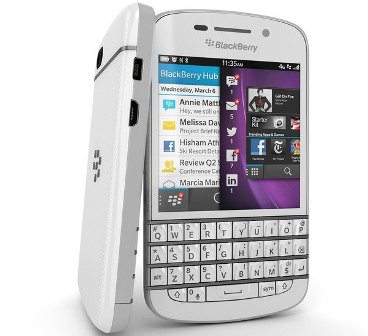 The new Q10 is powered with 1.5 GHz dual-core Cortex-A9 processor along with 2GB of RAM and PowerVR SGX544 GPU. According to the specs it seems very similar to the full touch BB Z10 which was launched earlier with in Feb and was the first device to launch with BB 10 OS. Furthermore Q10 comes with preloaded with 16GB of built-in memory that can be further expanded upto 64GB using MicroSD Card.

Blackberry has also worked hard to provide better camera solution with Q10. They have integrated 8 Megapixel Rear camera with LED Flash capable to record Full HD 1080p video. There is also a 2 Megapixel Front facing camera for making video calls in 720p resolution. The smartphone is powered with 2,100mAh battery which is said to offer battery life upto 10 to 11 hours on 3G. In terms of connectivity BlackBerry Q10 supports  GPRS/EDGE, HSDA, dual band Wi-Fi 802.11 a/b/g/n with hotspot functionality,NFC and Bluetooth v4.0 with A2DP.

Blackberry Q10 will start shipping soon at the price of Rs. 44,990. No doubt the device seems to be very powerful in configuration but is it worth at the said price? We will find it out soon in our review.