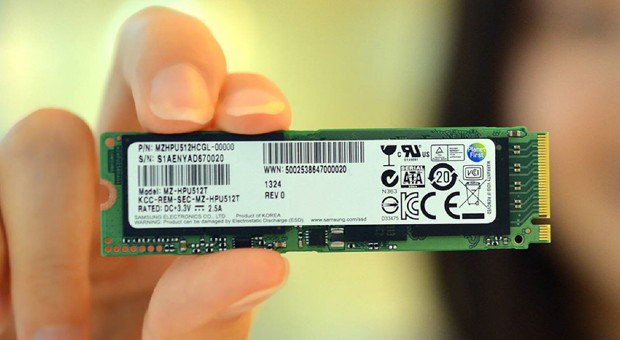 Samsung has today formalized its PCI Express SSD for laptops, the first in the market. It promises a break with the SSD performance which is two and a half times higher than the conventional SSDs.

Samsung announced that it had started mass production of its PCI Express SSD for laptops. Responding to the reference “XP941” adopts the standard format of M.2, but uses the PCI Express 2.0 interface, and not the Serial ATA 6 Gb/s.

It thus claims a sequential transfer rate read at 1400 MB/s, a record for a laptop, which exceeds far from the theoretical maximum of 625 MB/s Serial ATA III. Samsung claims that its product is 10 times faster than a hard drive, and 2.5 times faster than the best Serial ATA SSD.

Until now SSDs operator like PCI Express interface were offered only in the form of expandable card for desktop PC. Samsung XP941 is the first that can accommodate with a laptop, including an Ultrabook or similar. It adopts the M.2 to this format, which is in the form of a printed 80 x 22 mm and 6g circuit, which is seven times less bulky and nine times lighter than a conventional SSD format of 2.5 inches.

The new Samsung SSD is already used for computers that are recently made: some of the new Apple MacBook Air with Intel Haswell processor. They offer practical speeds of around 730 MB/s due to a PCI Express port that has two times fewer lines than in the SSD supports.