Out of nowhere yet present on the official website of Motorola, a new thin smartphone called “Droid Ultra” suggests the arrival of a new model with kevlar body.

Motorola Mobility will soon tell you more about its first smartphone designed under the leadership of its new owner “Google” that has promised smartphones at reasonable size by offering new features.

The Moto X, bringing the new Motorola logo generated some curiosity for several months but has not yet been announced. The device will be launched in the U.S. by the Verizon Wireless operator in Droid Ultra series. This is the opinion of some observers as the name Droid Ultra appeared on the manufacturer’s official website. 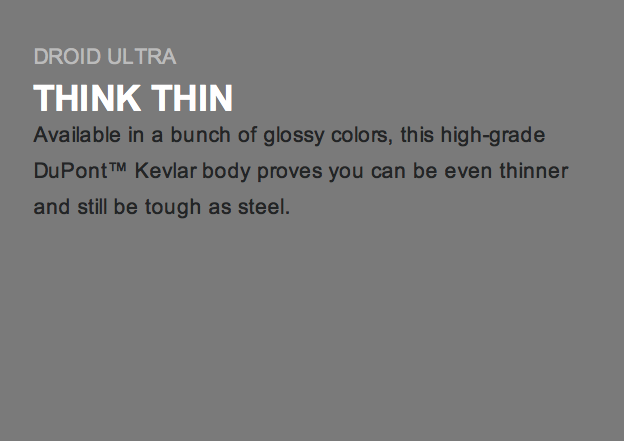 Very little information is given but the associated text is marked “Think Thin” which suggests a thin smartphone, and promises a device available in several colors and with a Kevlar body designed by the DuPont group.

Motorola Mobility has made a specialty of smartphones with kevlar body and high-capacity batteries and these two aspects are to be kept in the design of products under the impulse of Google.