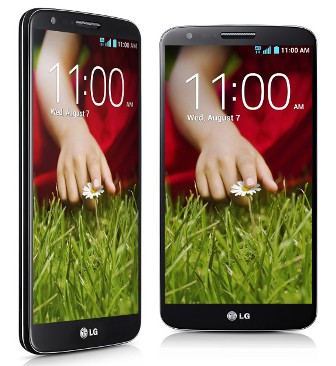 LG’s next big hit “G2” was in news since past few weeks, finally it got official yesterday at an event held in New York. This is so far the best of LG with several new technologies and smart features. The first new style that G2 got is all physical keys are placed at the back of the phone. There is nothing on the borders or in front of the phone except the high defination screen. LG G2 features a  HD IPS 5.2-inch touch screen display offering 1920×1080 pixels resolutions with 423 ppi that offers you sharp crystal clear viewing angles from any side of the device. The display is best suitable for watching HD videos or playing HD games.

Launched in Black and White colors LG G2 can be also a good choice for photography fans coz of its 13 Megapixel rear camera with LED Flash and OIS. There is also a 2.1 megapixel front facingc camera for making video calls and conferencing. Users can capture high quality images and of course 1080p video recording at 30 fps. LG G2 also stands tall in connectivity with support of 4G LTE / 3G HSPA+ 42Mbps, WiFi 802.11 a/b/g/n, Bluetooth 4.0 with A2DP and GPS / aGPS. The phablet is runing on 3000 mAh battery from which we can expect battery life for an entry day in usage mode. LG revealed in the event that LG G2 will start shipping in next two months and will first hit South Korean market followed by rest of the regions. As of now there is no confirmation about the price but will update the same here soon.