The company Distimo, specializing in the analysis of directories of mobile applications, has released its report in July and observed a large increase in the share of Google Play Store.

In passing the Apple App Store, the company Distimo classifies mobile applications and the most popular publishers by country and categories. These figures are published on a regular basis through daily, weekly, monthly or quarterly count.

In July, the analysts explain that the top 10 applications that generate the most revenue in the Apple App Store was similar to the previous month. This record includes only games, popular Candy Crush being in pole position. In contrast, Clash of Clans and Hay Day, are in second and third place and publisher, Supercell, would have generated the most overall revenue. 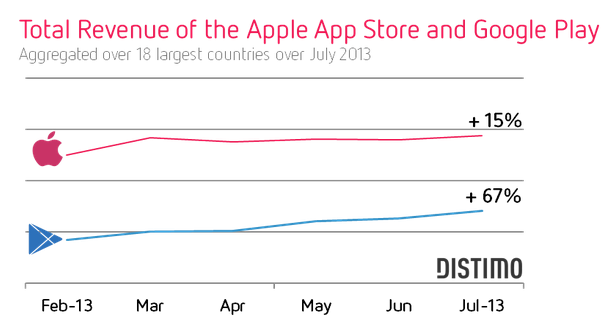 Candy Crush is also the head of the rankings on Google Play but the publisher LINE developing several games and a messaging tool, has three particularly popular applications: LINE WIND runner, LINE Pop and LINE Pokopang.

Distimo says that in terms of income, the App Store is more important than Google even though Google Play would have increased by 67% over six months and 11% since June. In comparison, the income of the App Store have shown an increase of 15% since February and 3% since June.

American, Japanese and Korean mobile users are spending more while on the Old Continent, purchasing applications or in-app content is more prevalent in the United Kingdom.