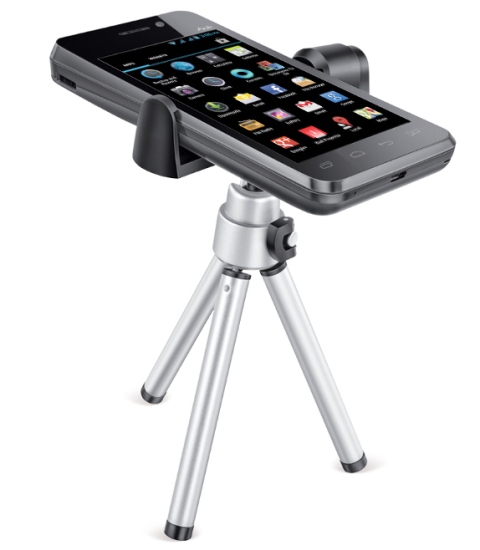 We have seen few good projector phones in past like Samsung Galaxy Beam, Micromax X40, Spice M9000 Popkorn, etc. Now iBall also revealed their first ever Projector phone named as “iBall Andi 4A”. The device has a 35 lumens projector which suports VGA projection upto 10 feet. Price set by the brand for iBall Andi 4A is Rs. 17,999/- whcih includes a free Tripod.

Apart from a Projector phone, Andi 4A is a smartphone as well running on Android 4.1 JellyBean operating system. It features a 4 inch touch screen display offering 480×800 pixels resolution at 233 ppi. The Dual SIM phone is powered with 1 GHz Dual-Core Cortex A9 Processor accompanied with 512MB of RAM. Now although the projection support seems to be very good but the processing power appears to be mid ranged. Anyways, with Andi 4A we also get an 8 Megapixel rear camera with Auto Focus and LED Flash capable to capture high quality images and video recordings. There is also a 0.3 megapixel VGA front facing camera for making video calls and conferencing.

iBall Andi 4a Projector Phone comes with 2GB Internal Memory which can be further expanded upto 32GB using MicroSD Card. In total there is 4GB storage but only 2GB is provided for users access and rest goes to the system. In terms of connectivity the phone supports 3G, Wi-Fi 802.11 b/g/n, Bluetooth with A2DP and GPS / aGPS. It is powered with 1500 mAh battery from which we can expect upto 5 to 7 hours of battery life with normal usage and projection. iBall Andi 4a is now available in the market at the said price of Rs. 17,999/- with free tripod.