While Nokia will open tomorrow its annual conference in Abu Dhabi, a number of new information seems to confirm earlier rumors about the next high-end smartphone from the manufacturer.

Tomorrow at noon the top of Nokia World will open in which the Finnish manufacturer will present its next product. According to some reports, the company should announce a tablet equipped with Windows RT and a wide-screen smartphone. The characteristics of the latter have been confirmed by an official partner of Nokia.

Indeed, a photo was leaked from the Nokia’s Chinese Tmall store website. It describes the smartphone in question and offers a pre-order form. This mini site will confirm previous reports on an upcoming smartphone called Lumia 1520. It would be indeed a Phablette with: 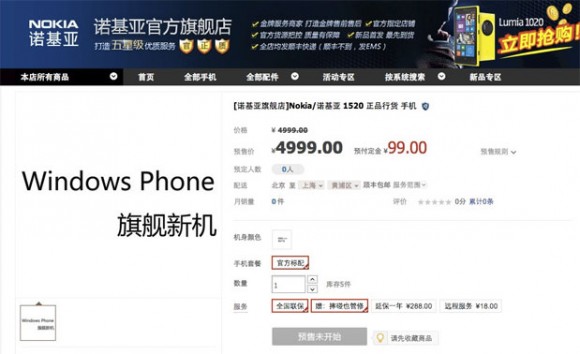 The Lumia 1520 would be the first official phone to board the third update of Windows Phone and the device is displayed at a price of 4999 yuan or 600 euros.