Sony offers a new model of digital paper, DPT-S1, presented as the finest in the world from December 3rd in Japan. A device that will not be too cheap.

With dimensions of 23.3 x 31 x 0.68 cm, the DPT-S1 tablet is presented by Sony as the world's thinnest digital paper. The device, touch, use the Mobius Ink electronic E ink system, and is intended for users who want to take a lot of notes while saving paper and saving them digitally.

The DPT-S1 features a 13.3-inch display for a definition of 1200 x 1600 points. The device is solid through the use of a "flexible" screen, without glass, and displays a particularly low power consumption allowing it to hold up to three weeks on before needing to be recharged – an estimate that is inevitably to decline when Wi-Fi is used. It is used with a stylus, which allows to take notes like a real pad of paper, and has 4 GB of storage space complemented by a microSD card slot. Finally, the DPT-S1 can read PDFs, but it is the only format accepted outside the recorded notes: it is therefore not having a digital reading light, even if the design might suggest. It is also compatible with Windows XP/Vista/7/8 and Mac OS X 10.5.8 or later. 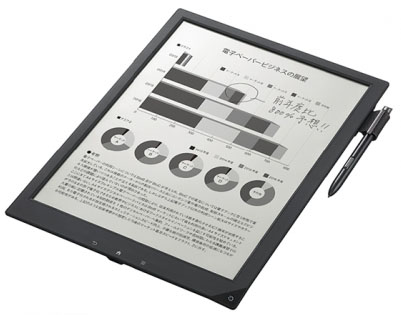 But the opportunity to get rid of the paper and keep the notes in digital format has a significant price: the device will indeed costs 98,000 yen, or about 735 euros. The DPT-S1 will be available in Japan in December, and therefore on the Internet. Output in the rest of the world is not to be excluded, but Sony has not announced anything in this direction.