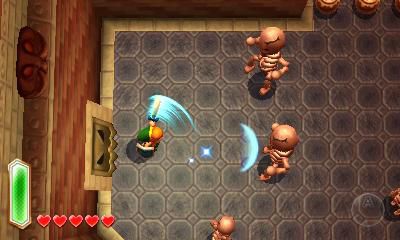 Nintendo has released a new trailer for the next episode of Legend of Zelda coming to 3DS, to mark its launch next week in Europe. The StreetPass feature is particularly in the spotlight.

The Japanese publisher has recently released a new trailer to celebrate the upcoming launch of the new adventures of Link between Hyrule (the world of light) and the Lorule (the dark world). In both cases, a princess will save.

The video highlights the StreetPass feature in which players can send black Link to compete against other players to a duel and so glean rubies.

To recap, Legend of Zelda: A Link Between Worlds will be released on November 22, 2013 in Europe , the box size and dematerialized through the Nintendo eShop. A golden Nintendo 3DS will be launched on this occasion.