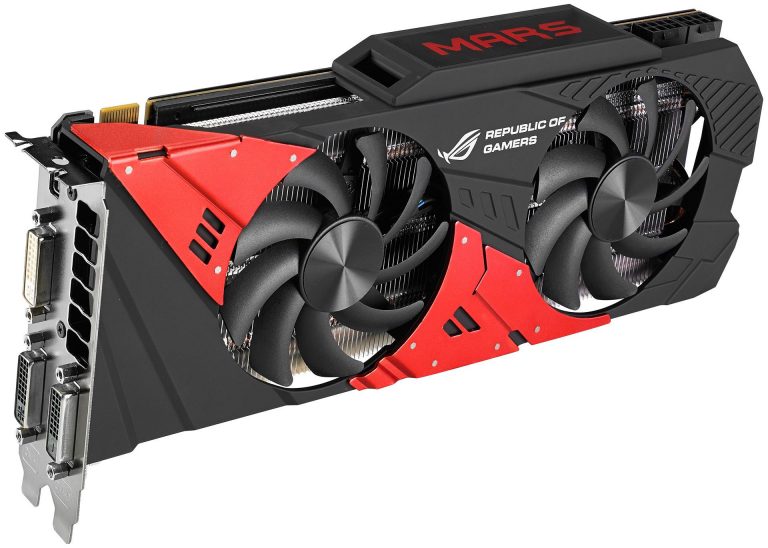 Asus launches this morning "Mars 760", an amazing graphics card claiming the title of one of the most powerful graphics card in the market.

Asus is back and launches a new product combining two homemade graphics chip (GPU) on a single printed circuit board (PCB).

This time Asus could not use one of the most powerful Nvidia GPU. Probably for reasons of power consumption and/or heat dissipation, it had to settle for a mid-range GPU. But even with two GeForce GTX 760 in SLI it boasts superior performance than GeForce GTX Titan, the former flagship of Nvidia, with 6% in Bioshock Infinite, 14% in Crysis 3 and 39% in Tomb Raider. Only the new GeForce GTX 780 Ti, sold a little more expensive, is better.

The GPU is clocked at 1008 MHz and 1072 MHz natively in Boost, with 4GB of GDDR5 memory at 1650 MHz. This whole benefits from the high-end Japanese components and a 12-phase power. Associated with the system is DirectCU II cooling, these components can be overclocked with the GPU Tweak utility.

Finally, the card provides two DVI-I Dual Link, a DVI-D Dual Link and mini DisplayPort output, this may serve as a HDMI output using an adapter.

The Asus Mars 760 will be available in March around the world at the retail price of 630 euros. Compared to two GeForce GTX 760 separated, sold significantly cheaper (about 450 euros per pair) but at least as good, the extra cost is justified only for fans of mini-ITX enclosures. And for 20 euros more, those who want maximum performance on a single PCI-Express slot will favor one GeForce GTX 780 Ti.