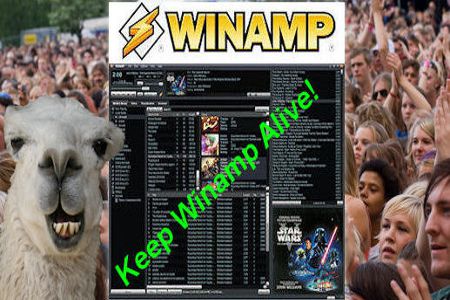 Finally, the legendary Winamp audio player is not dead as planned on 20 December, due to the manifestation of users, the software offers a reprieve.

AOL announced a definitive end to the Winamp player, the leading audio software in 90s which has largely contributed to the emergence of the MP3 format by registering as a reference for readers of the format.

However, the company announced that in addition to no longer provide any updates to the software, the application is no longer available for download from December 20. But Winamp is holding the bar and seems to have granted a stay before the mobilization of users that do not want to see this iconic figure disappearing in the Web and IT.

Failing to impose the survival of its expense, users now demand that the editor opens the application code so that new versions of the app can be born for personal initiatives.

In the meantime, Spotify has launched SpotiAmp, an extension to its reader for its streaming platform which incorporates lines and design of Winamp. An extension is however reserved for Premium subscribers, charged at EUR 9.99 per month subscription.