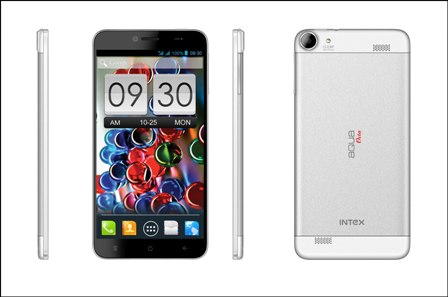 Intex announced the launch of its ‘Aqua Octa’- India’s first true Octa Core processor phone. The company announced their strategic alliance with MediaTek in mid November last year to bring this innovative technology on its platform and claimed to launch the device in the Indian market by end of December or early January 2014.

The edge ahead, Intex ‘Aqua Octa’ is the slimmest smartphone available in Indian handset market with a thickness of only 7mm adequate for a perfect grip for ones palm. A true Octa core processor studded in its heart the phone beats at a speed of 1.7 GHz that enables a user to experience enhanced video experience with exceptionally low latency per frame.

With all 8 cores running simultaneously the smartphone has the unique ability to allocate individual browser tabs to CPU cores and is geared up to provide you a tad better music, visual, multimedia, gaming, web browsing  and multitasking experience, that too with an optimal use of the power and battery. Talking of battery the phone comes loaded with 2300mAh marathon battery that provides up to 6 hours of talk time and 180 hours of standby.

This dual SIM smartphone comes laden with a 6 inch capacitive touch OGS HD display that provides a 720X1280 resolution. The phone is studded with 13MP rear with autofocus and also flaunts a 5MP front camera. It gives a high resolution video playability and support various video formats such as 3GPP, 3GP, MP4 and AVI and can play 60 FPS video files giving an amazing video experience.

For the users and urban professionals who like to keep their world loaded on their smartphones the phone comes with an elaborate memory backup with 16GB internal memory and 2GB RAM making it faster and better while multi-tasking. Also, much to a users delight the phone also comes equipped with 5GB cloud memory.

Running on Android 4.2.2 Jelly Bean the smartphone has plethora of connectivity options available and gives its users an ease of connectivity via Micro 5 Pin port, bluetooth, Wi-Fi, 3G, EDGE, GPRS and WAP.

Available in White and black, ‘Aqua Octa’ will be available across 40,000 plus retail outlets, more than 42 INTEX SQUARES (exclusive retail stores), several hypermarkets and other leading e-commerce portals from January 15 onwards.