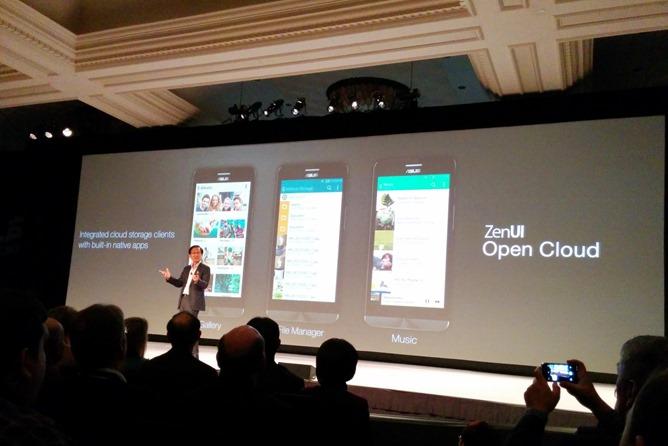 As promised, Asus is back on the field of smartphones in 2014 with a range of Asus ZenFone Android phones with Intel Atom processor.

Having pulled out of the difficult game of Transformer touch pads with its products and its collaboration with Google for tablet Nexus 7, the Taiwanese brand Asus has gained visibility in the field of smartphones.

Beyond hybrid products like PadFone and PadFone Mini, it promised to return to this segment in 2014 and is logically on the CES show in Las Vegas that Asus unveils ZenFone range consists of three smartphones equipped with screens 4" to 6" with Android 4.3 Jelly Bean and an overcoat of ZenUI and optimized Android applications.

The first series consists of Asus ZenFone 4 with 4" screen at a resolution of 800 x 480 pixels and a 1.2 GHz Intel Atom Z2520 processor with 1GB of RAM. This smartphone is compatible with H+ (DC-HSPA 42 Mbps) and features a 5 megapixels camera in the back and a 0.3 megapixel digital camera on the front. It has a memory card slot (up to 64GB) and a 1,170 mAh battery.

Asus ZenFone 5 smartphone has a display of 5" HD resolution (1280 x 720 pixels), usable with gloves and stylus and runs with an Intel Atom Z2580 2 GHz Clover Trail+ processor with 1GB of RAM. It is also consistent on DC-HSPA 42 Mbps and operates with a camera of 8 megapixels on the back and a secondary 2 megapixel camera on the front. It has a memory card slot (up to 64GB) and a 2050 mAh battery.

Finally, the Asus ZenFone 6 plays in the phablet segments with its display of 6" HD resolution (1280 x 720 pixels) with GloveTouch (usable screen with gloves and with a stylus) and an Intel Atom Z2580 2 GHz processor with 1GB of RAM. Still compatible with DC-HSPA, it rises to 13 megapixels with Asus pixelmaster technology on the back, with a front 2 megapixel camera and wide battery of 3230 mAh.

While the PadFone plays on the high end, the Asus ZenFone series thus offers median characteristics and attractive prices mentioned below: