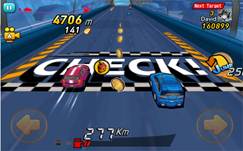 LINE Corporation, owner and operator of the free call and messaging app LINE, today announced the release of LINE GO!GO!GO!, a free social racing game for iPhone and Android. LINE GO!GO!GO! is a simple and fun racing game, the first of its kind on the LINE Game platform. Players steer and jump their car as they try to drive as far as possible. In LINE GO!GO!GO!, players’ scores depend on how far they can travel and how many other vehicles they can pass before they run out of gas. Gas depletes the farther the player drives. Crashing into other vehicles not only slows the player down, it also further depletes the player’s fuel gauge, so not crashing is the key to driving long distances. Passing checkpoints replenishes some fuel, and also garners the player a score bonus.

Tailgating behind other vehicles reduces wind resistance and gives a speed boost, allowing players to drive further on less gas. Passing close to another vehicle starts a “Go!” combo. Stringing together multiple close passes builds the combo, increasing the player’s speed and points, so timing is the key to getting really big scores. At certain points on the road, a yellow exclamation mark appears. This means a rival car has joined the race. Passing the rival car or destroying it with an item within the allotted time limit is another way to get bonus points. Points mean prizes, and players can acquire Gold and Trophies depending on how many points they get. These can then be exchanged for many unique characters and over 50 different types of cars. Each car and character has a different set of abilities, so there is plenty of scope for players to find the playing style that suits them the best. There are plenty of social features. Players can see how they rank against their friends, exchange Tires necessary for play, and boast about new high scores on each other’s Timelines, all of which earn Friendship Points that can be used to get more cars and items.