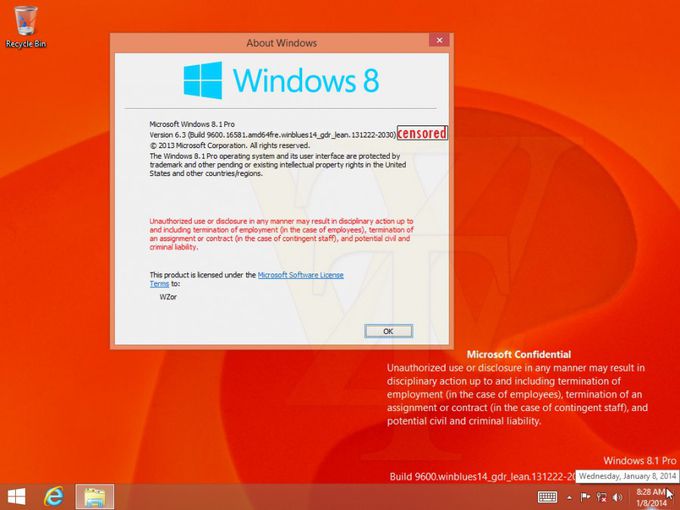 Raw leaks for Windows 8.1 update is expected in next spring. It should be minor. The return of the Start Menu is not confirmed yet.

The name Windows 8.1 Update 1 flows around the internet. It would be a free update for Windows 8.1 that Microsoft would provide via Windows Update – and not in the Windows Store – next spring.

It is a RTM version and thus distributed to OEM partners that Microsoft seems set for March 2014, while the general availability would be for April. A timing seems quite plausible insofar since Microsoft held its BUILD conference from April 2 to 4.

This information, which are in line with previous indiscretions were published by the Russian site WZor known for its numerous leaks before an upcoming release of a new version of Windows. They are accompanied by screenshots as well. At the moment, there is no sign of a return of the Start Menu.

After Windows 8 and the introduction of the Modern UI interface, Microsoft has made some concessions with Windows 8.1 so users – including professionals – find their bearings more easily with the traditional interface (Start button, start directly on the desktop, etc).

These concessions should continue with the next updates to the OS but this will ultimately perhaps give more to the wave of updates known as code name Threshold and approached to early 2015. Windows Threshold is also expected to execute Modern UI applications directly in windows on the desktop.

Windows 8.1 Update 1 is classified as a minor update. For Mary Jo Foley of ZDNet, its purpose is to bring the PC platforms, tablet and smartphone from the perspective of the programming interface. At its BUILD conference, Microsoft Windows Phone 8.1 should raise and release new APIs.