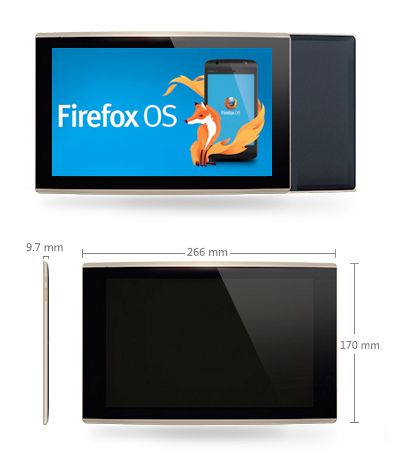 Mozilla has decided that Firefox OS must not only be satisfied with smartphones. The operating system that advocates openness leveraging Web technologies will try their luck on Smart TV with Panasonic while it is already positioned on the VIA computer.

Another logical step is a presence on the shelves. To do this, Mozilla has approached Taiwanese group Foxconn. At first, it is the developers who will be entitled to the first models and thus the opportunity to mature Firefox OS on this type of device.

Technical specifications had been summarily discussed. Director of Firefox at Mozilla, Asa Dotzler, reveals those of the first model with Wi-Fi (802.11b/g/n) out.

This model is listed under the name InFocus New tab F1. It has a SoC Allwinner A31 architecture with ARM Cortex A7 with quad core to 1GHz and PowerVR SGX 544 graphics support.

The tablet has 2GB of DDR3 RAM and 16GB of flash memory. It displays a IPS capacitive panel with a diagonal of 10.1 inches and a resolution of 1280 x 800 pixels. Two cameras are available: 2 and 5 megapixels.

Besides Bluetooth connectivity, a GPS chip and a gyroscope, microSD, microUSB ports and headphone category is also listed. The last point relates to a battery of 7000 mAh and dimensions of 170 x 266 x 9.7 mm.

These characteristics place the InFocus New tab F1 in a range of performance that can be qualified honest.