Samsung is expected to soon unveil a new interface for its Android smartphones.

While the Galaxy S5 should no longer delay to be announced, there is a good chance that the Android overlay placed on a new development from the manufacturer has given rise to previous versions.

The announcement of an interface UX Magazine on its Galaxy TabPRO and Galaxy Notepro tablets unveiled at CES 2014 Las Vegas certainly gives a specific direction to these products but may also provide an overview of what will soon be available on smartphones brand.

Early indications were made there a few weeks ago by EvLeaks on Twitter, showing that Samsung is working logically to a new presentation of the home screen, which could take some elements of UX Magazine interface presentation. 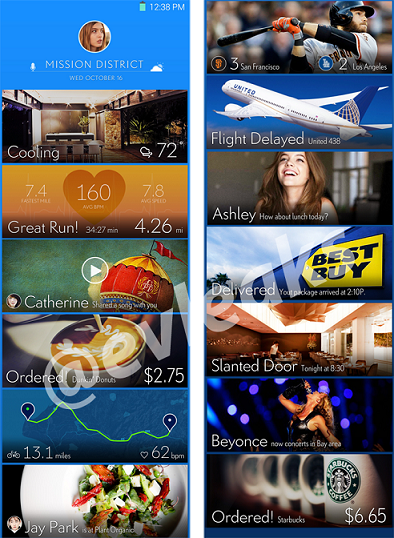 A new batch of images, confirms a certain proximity between the interface for tablets of CES and one that prepares on smartphones, with live tiles forming a stream coming from different sources and accessible from a glance eye, a kind of mix between presentation of Flipboard and dynamic tiles of Windows Phone.

The Samsung TouchWiz interface could therefore be turmoil in the coming weeks and offer a decidedly different design of its previous developments. And it is likely that the Galaxy S5 inaugurate this new presentation, before the decline in other models.