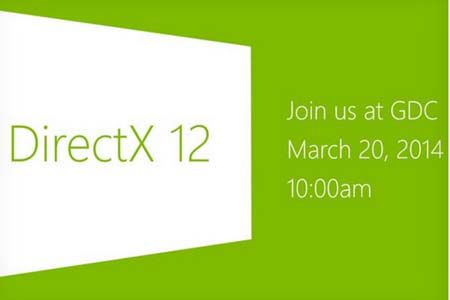 Microsoft has announced that the Game Developers Conference in San Francisco to be held on March 20 will be an opportunity to lift the veil on DirectX 12.

So on March 20 Microsoft will present the new version of DirectX 12, the collection of libraries for multimedia application programming, and in particular for games or programs involving video.

As usual, Microsoft has received the support of the manufacturers of graphics cards and GPU, we can discover the logos of AMD, Intel, Nvidia and Qualcomm on DirectX 12 page currently serving as a teaser.

This is Anuj Gosalia which will host the presentation called "DirectX : Evolving Microsoft's Graphics Platform", a title that tells us no more about Microsoft's ambitions at this level, and ultimately seems rather small in comparison with effects of ads surrounding DirectX 10 and DirectX 11.

However, some information is left, developers have asked microsoft to give them a better tool that will be able to "take advantage of the lower performance of PCs, tablets, phones or console." It is thus expected that the DirectX 12 is placed on optimization of all, and on Cross Platform applications.