Last weekend, players have noticed a mysterious closed beta of Watch Dogs on Xbox One Games Store, before being quickly removed from the online service. Has Ubisoft planned to deploy this test version?

Scheduled for release in a few weeks on PC and consoles, Watch Dogs is eagerly awaited by fans of the GTA look-alike game. This Ubisoft title evolves in the city of Chicago, offering a very broad and open environment.

Things start to rush towards the editor, since Reddit users highlighted the momentary appearance of a closed beta of Watch Dogs on the Xbox One Online Store. 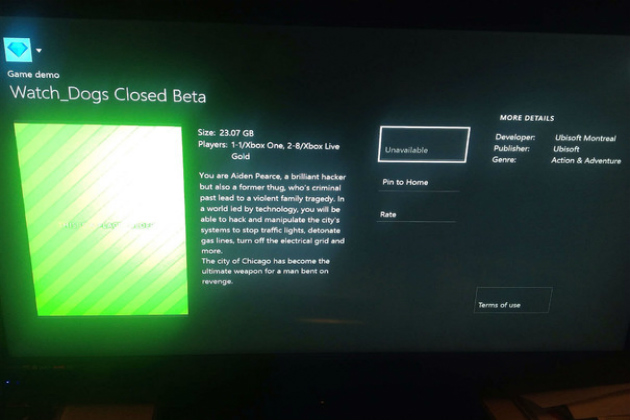 The photo confirms that this trial version weighs 23.7 GB. However, this list was quickly removed by Microsoft. Would it be a publishing error or a short test for the deployment of this closed beta to a select few?

For now, Ubisoft said the site Videogamer that they have "nothing to report" about the leak of information.