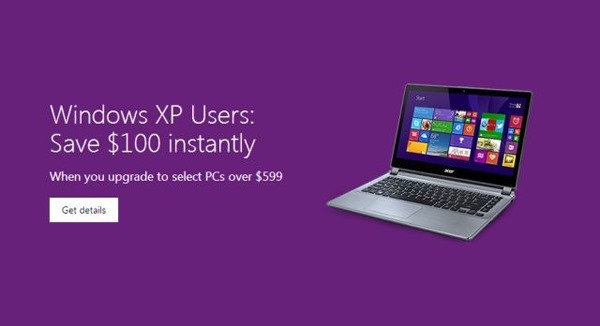 New incentive is pushed by Microsoft to abandon Windows XP and for that matter adopt Windows 8.

Not far from the deadline of April 8, 2014, the Redmond company continues its offensive against anti XP. While a free data transfer tool is also offered in partnership with Laplink, Microsoft warns that old PC model may not cash the transition to a new Windows. The opportunity therefore is to opt for buying a PC or a tablet with Windows 8.

The incentive is even stronger in the United States with vouchers worth $50 that are offered. To make later argues online on Microsoft Store until the end of April, they are conditioned to purchase a Windows 8 device from a given selection.

Premium service support is also provided free for 90 days to help for any difficulties with the new device. It is sure that the transition from Windows XP to Windows 8 may be unsettling for some users.