The OnePlus One smartphone, which is expected to formalize at the end of the month, now reveals interface on its screen. Some screenshots are available.

So far, the ideal smartphone named "One" imagined by the startup OnePlus company behind which we find to recall a former manufacturer Oppo (Pete Lau) and the developers of the CyanogenMod ROM, have always proved through its features. It may be recalled that OnePlus One smartphone comes with Qualcomm Snapdragon 801 platform with quad-core processor, a 5.5-inch Full HD screen (1920 x 1080 pixels), 13 megapixel digital camera supplied by Sony, 5 megapixels webcam on the front along with a battery capacity of 3100 mAh. 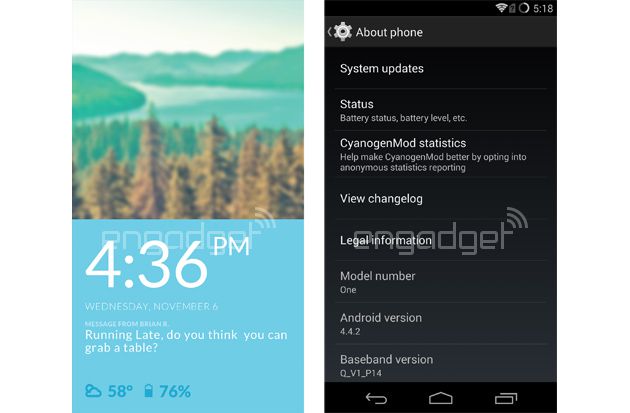 More recently, some screenshots showing its operating system of its own were sent to the website Engadget. It reveals its lock screen with the time, unread messages, the weather and the level of battery charging and its part indicating about Android 4.4.2 KitKat base. The second capture of the way, also shows virtual Android buttons, indicating the absence of Android physical buttons for "One" smartphone.

The OnePlus One smartphone could be released with a price below $400.