The next version of Android will be moved to the stage called "dogfooding", closer to the final version but will not be available for several weeks at best.

Currently in version 4.4.2, the Android platform should soon benefit from a minor change in the form of a version 4.4.3 which will mainly role to correct a number of bugs.

Known as KitKat MR2 (while Android 4.4.1 and 4.4.2 versions were KitKat MR1), this update is not yet the one that will migrate the mobile platform to a 64-bit compatibility while news on 64-bit processors have started to break since the beginning of the year. 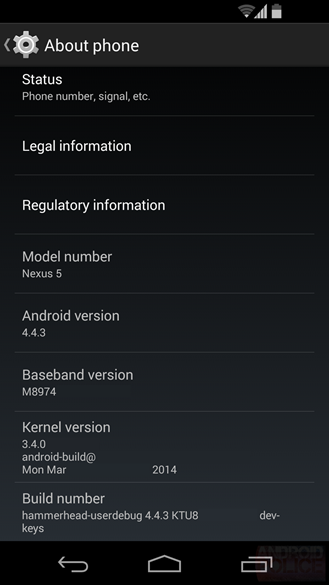 According to Android Police, Android 4.4.3 has just passed the stage of "dogfooding" which is to be tested by users not associated with the development team of the mobile OS. It is deployed on the devices of certain employees of Google and limited to Nexus devices (Nexus 4 and 5 smartphones, as well as Nexus 7 2012/2013 and Nexus 10 tablet).

This step sets the availability of the final version of Android 4.4.3 to few weeks without the exact date which is unknown. It will depend on the results of dogfooding stage, says Android Police.

This update does not bring new features but fixes vulnerabilities and stability problems of the platform. It will have to wait a bit before seeing on OTA (Over the Air).