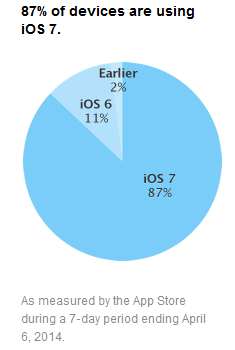 The adoption rate of iOS 7 climbs again. According to data released by Apple, it is now running on 87% of devices connecting to the App Store.

The firm at Apple has updated its statistics this week on the rate of adoption of different versions of iOS. Mainly to developers as they target their applications, they are based on the connections of the iPhone, iPad and iPod touch in the App Store.

The vast majority of devices are now running on iOS 7.0. The distinction between iOS 7 and iOS 7.1 is made ​​and the rate of adoption for iOS 7 posted now reached 87%. At the same time, the share of iOS 6 decreases and drops to 11%. Older versions have them for 2%.

Recently, based on Google Play, Google has released the adoption rate of Android versions. They show that KitKat (5.3%) ended up taking a little off while its publication took place just over a month after the iOS 7.0. Bringing together the various versions of the branch Jelly Bean, it displays 61.4%.