After an initial presentation on Smartphone, followed by a news evoking a port on tablets, the Tango project has been officially unveiled at Google in the form of a tablet shipping with famous module capable of mapping environments in 3D.

Google had just lifted the veil on its tablet project Tango, a banded sensor in the tablet that will be able to truly capture and map entire rooms offering 3D renderings. The idea for Google is  to see these devices invite around the world and to ensure that users replace Google Cars that ply the city streets to digitize the world, including domestic.

The shelf in question shows all modules to directly integrated without causing heavy aesthetic modification. It will be sold at $1,024 through a development kit that will be proposed at the end of the year, Google announced already to make thousands (compared to 200 Tango smartphones manufactured). 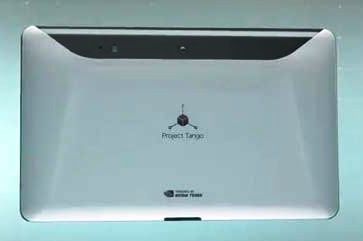 The device was designed in collaboration with Nvidia and features a 7-inch screen, a Tegra K1 processor, 4GB of RAM, 128GB of storage and LTE connection. But of course, it is at its photo sensor that is most interesting because it has a depth of field sensor, a gyroscope, accelerometer that will always be aware of its orientation to increase the cliches and realize a 3D capture. Specifically, the operation is as simple as to make panoramas on smartphone, except that here, the user can move and orient the tablet as he would like to capture an entire room, a street, or what he wants, and the final result appears in 3D.

Google would make a tool to provide the indoor mapping in public buildings. During the presentation of the first Tango smartphone, Google indicated to be preludes development. It now appears that the firm accelerates the project and relies heavily on its success.