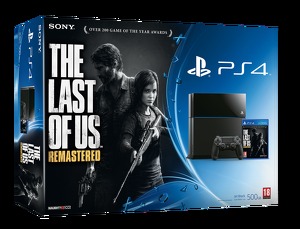 Sony has recently announced the upcoming sale of a bundle including a PlayStation 4 console, a DualShock 4 and the game, The Last of Us Remastered.

Released last year on PS3, The Last of Us is preparing to make its return to PlayStation 4 within a graphically enhanced version called The Last of Us: Remastered. This edition features a 1080p resolution and a frame rate of 60 frames per second.

Due for release on 30 July 2014 at €39.99 in dematerialized and physical format on the PlayStation Network, the title of Naughty Dog will also be a PS4 bundle.

Sony announced that the pack will contain the PlayStation 4 console equipped with a hard disk of 500 GB, a DualShock 4 controller and the game, The Last of Us: Remastered. The marketing will "soon" costs 429.99 euros.

This represents a discount of 10 euros in comparison with purchasing the game apart.