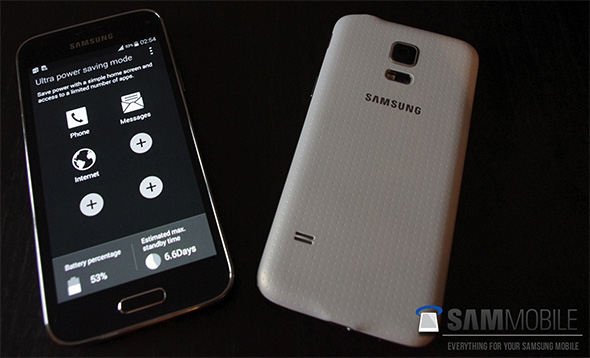 Galaxy S5 will not escape from a Mini version which should be formalized in mid-July.

Like last year, the latest flagship of Samsung will be available in a Mini variant.

The screen of the Galaxy S5 smartphone remains around this limit (5.1 inch with Full HD resolution), but its little brother to come, the Galaxy S5 Mini proposes a 4.5-inch Super AMOLED display with HD resolution (1280 x 720 pixels), while the processor should switch to a Exynos 3470 quad-core running at 1.4GHz (previous rumors suggested a Snapdragon 400, perhaps in a geographical variant) and accompanied with 1.5GB of RAM.

At the back, we should find an 8 megapixel camera (and 2.1 megapixels camera on the front) alongwith WiFi, Bluetooth, NFC, GPS and IR Blaster-compatible. It will be 4G LTE compatible with Android 4.4 KitKat with TouchWiz overlay recalling the Galaxy S5 smartphone and its new features (Ultra Power Saving Mode, Private Session, etc).

According to SamMobile site, by mid-July 2014 the Galaxy Mini S5 should be launched and it will not only be a very lightweight version of the reference model since it will find enhanced cover of IP67, the fingerprint reader or the heart rate sensor. Now it remains to know about its price.

Update: Galaxy S5 Mini is officially confirmed by Samsung alongwith its characteristics. It has 16 GB of storage memory, with possible extension via microSD card up to 64GB. Korean giant announced its availability for early July in Russia before expanding to other markets.