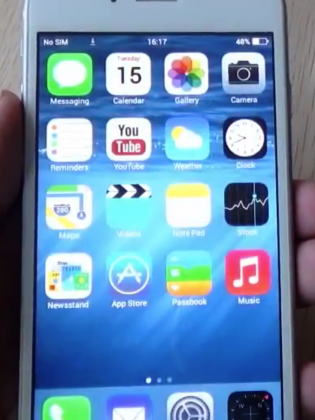 Another clone for the Apple iPhone 6 is to be announced soon. It has a little strange characteristics but.

While it has not been formalized by the firm at the Apple (scheduled for September), the iPhone 6 smartphone is already entitled to its clones. After the i6 of GooPhone that was discussed recently in the past news, here's the dubbed model of Wico6.

If the design of the device and its OS interface reveal a surge inspiration (up control panel and virtual Home button), some details do not deceive the watchful eye and remind us that what we face is a copy in Android like device with the MediaTek processor on board, the Safari Web browser or USB debugging.

As per its technical specs, it has an ARM Cortex-A7 processor with MediaTek MT6572 chipset (surprisingly with quad-core processor clocked at 2.4GHz as noted in the CPU-Z, while the latter is usually a dual-core 1.2 or 1.3 GHz), a 2GB of RAM, a 4.7-inch qHD display (960 x 540 pixels resolution) powered by a Mali-400 GPU and a flash memory of 8 GB. As for the OS, it comes with Android 4.2.2 (oddly recognized by CPU-Z as Android 4.4.2). Some also enjoy recognition as that iPhone 5C in the benchmark tool …

This phone has no price but it should be found at around $200.