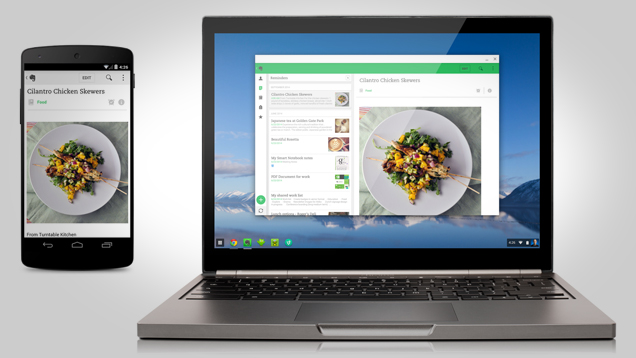 The first Android applications make the leap to run on the Chrome OS operating system.

This was one of the news from the Google I/O conference last June. It has finally taken shape for the end user with the availability of the first Android applications to run on Chrome OS.

Chrome OS therefore can only rely on web applications but also for Android applications, at least for the most popular. The promise is therefore to bring diversity to Chrome OS and especially extend the experience between smartphones and Chromebook.

It's a trend that is also continued with Microsoft applications on the Windows platform as a whole. For now, Apple prefers to keep separated by same uses if the rapprochement between iOS and OS X is particularly acute with iOS 8 and OS X Yosemite.

The beginnings of Android applications on Chrome OS are still shy with only four applications: Duolingo (Application for Language Learning), Evernote, Sight Words (learning to read) and Vine to find in the Chrome Web Store and not on the Play Store.

"Over the coming months we will be working with a select group of Android developers to add more of your favorite applications. This will give you a more seamless experience between your Android smartphone and your Chromebook."

At the same time, Google asks users to say what Android apps they want to use on Chrome OS.

Android applications can run on Chrome OS (with keyboard and mouse) using the Runtinme App for Chrome which is currently still in beta environment. It's not a port.