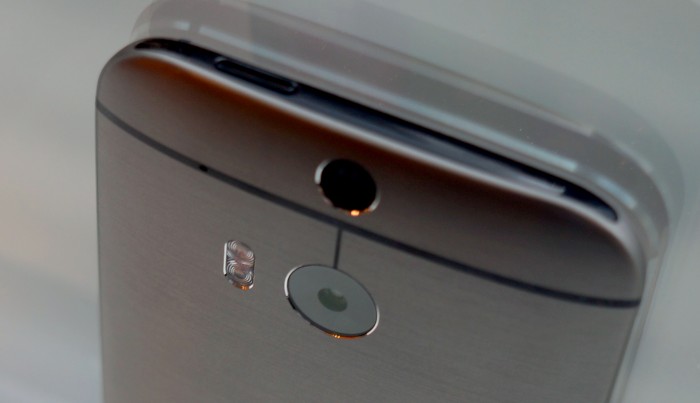 Leaks keep coming around the next M8 Eye phone from the Taiwanese manufacturer HTC, which is revealed through new photos.

The HTC company intends to go into overdrive with its upcoming smartphones for us to impress and truly move into the top three smartphones manufacturers flowing more in the world.

The HTC One M8 Eye is soon going to to be formalized by the brand which leaks have increased in recent weeks.

The sneak preview can be already seen in Asian media which displays the color of smartphone with a 13 megapixel camera sensor or two. It is now a little more obvious with the cliches recovered by Upleaks that has the front sensor of the smartphone.

One thus sees the sensor, along with a dual LED flash, but also some inscriptions highlighting definition of 13 million pixels f 2.0, while with wide angle. HTC would do so this with M8 Eye oriented selfies fans or fans of video conferencing in HD quality smartphone.

The same sensor will invite the back of the device for a perfect datasheet promising benefits of flying high: SoC Snapdragon 801 quad-core, full HD screen of 5.2 inches diagonally, 2GB of RAM, 32GB of internal storage, 4G compatibility and battery of 2400 mAh.

However, a question remains about the smartphone and stereotypes promoted by upleaks, since the proposed visual announces the device to be available in two colors (blue and red). Another element to take into account is the positioning of the camera, here at the top left on the back while it was in a central position on previous versions, like the One M8 standard.

Finally, the M8 Eye could differentiate itself from its big brother. Colours used are well matched with the selfie Phone displayed at side, at least in terms of the target by HTC.