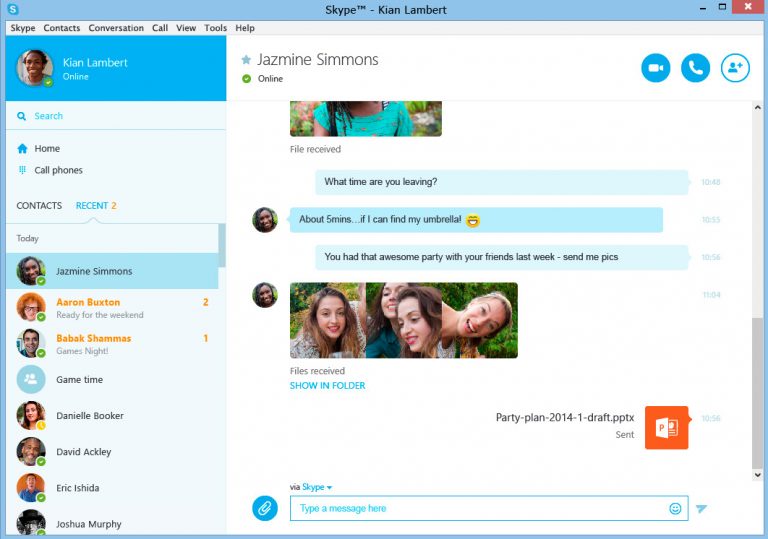 Skype changes head on the desktop with the goal of getting closer to the mobile application.

In May, the team at Skype announced the test to certain users of a new software interface for Windows and OS X, or in other words, customers of Skype on the desktop.

Yesterday, this version of Skype presented as "best in office" was formalized with the availability of version 7.0 for OS X, while Windows has the right to a pre-release time. It is quite surprising that OS X is used before Windows, but you can see a strategic choice to deliver a final version shortly before the availability of OS X 10.10 aka Yosemite.

This enhanced version of Skype allows us to offer a new interface that is consistent with that of the mobile application. "We have made ​​consistent experience with Skype on all platforms, whether you use it on a mobile phone or a desktop PC."

This passage is almost a requirement in the age of mobility. And led by Satya Nadella, Microsoft – who owns Skype – is constantly repeating, mobile and cloud first.

Users of Skype for iPhone will venture especially on land that already seem well known, but this consistency is desired compared to Skype mobile applications for Android and Windows Phone.

The style of the bubbles is taken for conversations to better separate them according to the caller. This is accompanied by new miniatures for profiles of contacts and the same icons for messaging, audio and video calls.

In instant messaging, photos exchanged are immediately displayed as a preview. For sharing files such as Office and PDF documents, they are marked with icons to identify the type of content to which they relate. What can be also found easily by browsing history.

Among other things, the Skype team also says the new design column supports multitasking or instant messages while passing an audio or video call. Note also on Skype 7.0 for Mac which is a 64-bit application.