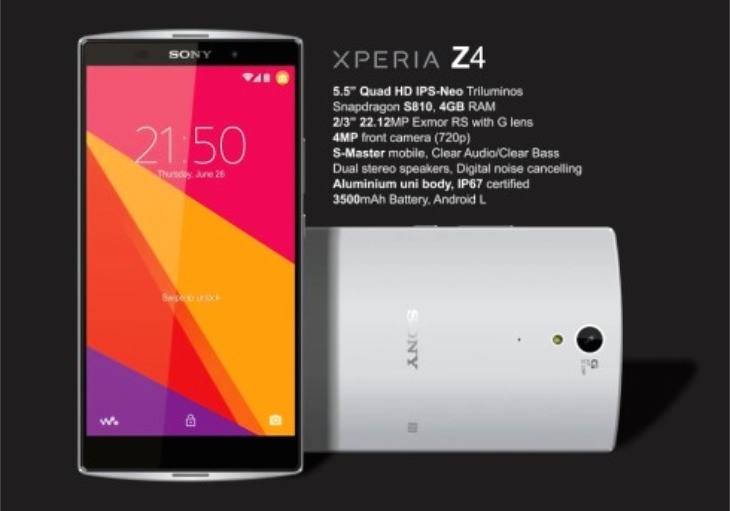 It is still only rumors, but the next Sony Xperia Z4 smartphone could be endowed with exceptional features, both on the processor as well as the camera sensor.

The Xperia Z series has the Sony group to regain visibility as a leading manufacturer of smartphones, even if the results of its mobile division weighs on global finance group. At the IFA 2014, the Japanese giant has unveiled its latest high-end smartphone, the Sony Xperia Z3, which is a solid reference but remained a little behind compared to thunderous new competition remaining on a Full HD configuration and Snapdragon 801 when other devices operate QHD screen and/or Snapdragon 805.

For the next model, the Sony Xperia Z4 , rumors started early promising a smartphone exception. New gossip is betting on a 5.5-inch display qHD resolution (2560 x 1440 pixels) but also a high-end SoC Snapdragon 810 – 64-bit compatible with 4GB of RAM in favor of the support of Android 5.0 Lollipop.

The Sony Xperia Z4 embarks 32GB of storage space, but it is not sure if it is expandable to memory card slot. It should also benefit from the new 20 megapixel Exmor sensor that was unveiled with the group and with the SoC Snapdragon 810, it's probably compatible with 4G LTE Cat 6 offering speeds up to 300 Mbps through carrier aggregation that will be presented.

Such a smartphone could end the fast renewal cycle of Xperia Z which led to the launch of new models almost every six months. To see if these nice features will be confirmed at major technology fairs earlier this year, we will have to wait